Latest:
You are at:Home»Food & Drink»Where To Get The BIGGEST Pizza In Park Slope
By Mary on · Food & Drink 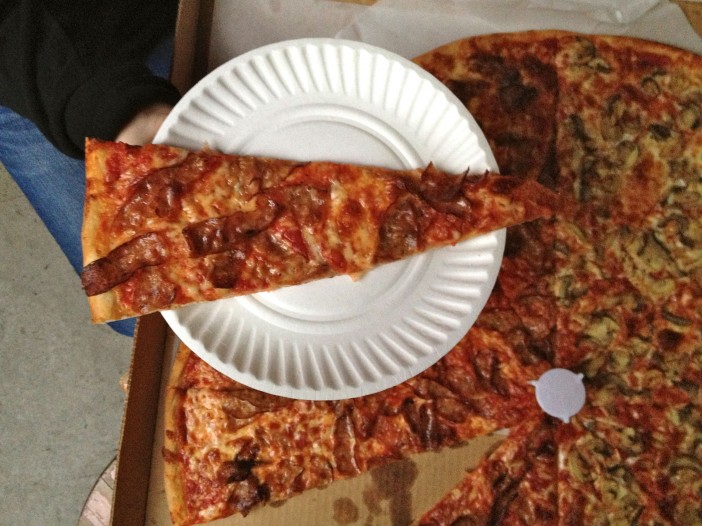 If you want to instantly make a lot of friends, order a giant pizza and have it delivered to a bar.

That’s what happened when we got this 28-inch behemoth from Roma Pizza, the pizzeria at 85 7th Avenue between Union and Berkeley that’s been making pies (the normal-sized ones we’re all familiar with, anyway) since 1982. One day a few weeks back, we passed by the shop and noticed an enormous box in the window, possibly the most effective advertising ever, since it clearly worked on us:

When we stopped inside to ask for more details, they told us they haven’t made too many since nobody really knows about it (it’s not listed on the menu), but that they think orders will pick up in the warmer weather as people have more parties. Plus, now you all know about it, and we can’t really recommend a more fun, impressive, and tasty item for your next get-together. 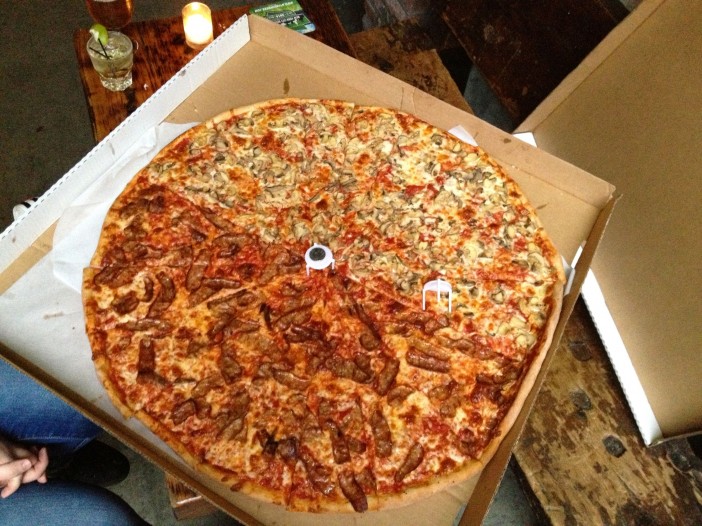 It’s pizza so large the box lid is not, like your average pizza box, attached to the bottom. It’s so big that the delivery guy almost couldn’t get it through the door. It’s so enormous that for scale, there’s a quarter on the pizza saver in the middle of the pie in the photo above, and you can’t even really tell. To put it in perspective: 28 inches is bigger than most bike tires, and is about the average length of a 9-month-old child. 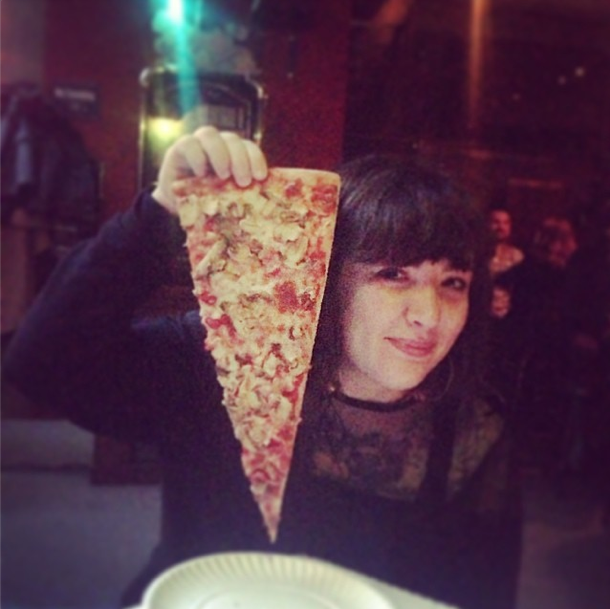 Everyone in Mission Dolores (249 4th Avenue), our kind host for the delivery, was suitably impressed, happy to learn where the pizza had come from, and ready to talk about their own big food adventures, if not take a slice for themselves (which is helpful in case you don’t have enough people in your party with giant appetites to match the giant pizza).

And, thankfully, the pizza wasn’t just a talking point — it’s actually very good. Roma makes a great, straightforward pie, just the kind of pizza you want to grab for a quick slice or order as part of a weekly ritual with your family. When they upsize the pie, none of that changes. We got ours with half sausage and half mushrooms, which was cut into 16 slices, for $37 — it seems to be the equivalent of about two of their regular pies, maybe a little less.

If you’re interested in ordering one for yourself, note that you should give them about a day’s notice. The friendly and accommodating staff will be happy to work with you on whatever you want — they can make a giant version of any of their pies — just give them a call at .