Latest:
You are at:Home»Health»Kids Inspired By New Run4Fun Team, Get Tips From Olympian
By Mary on · Health, Kids & Family, Neighbors 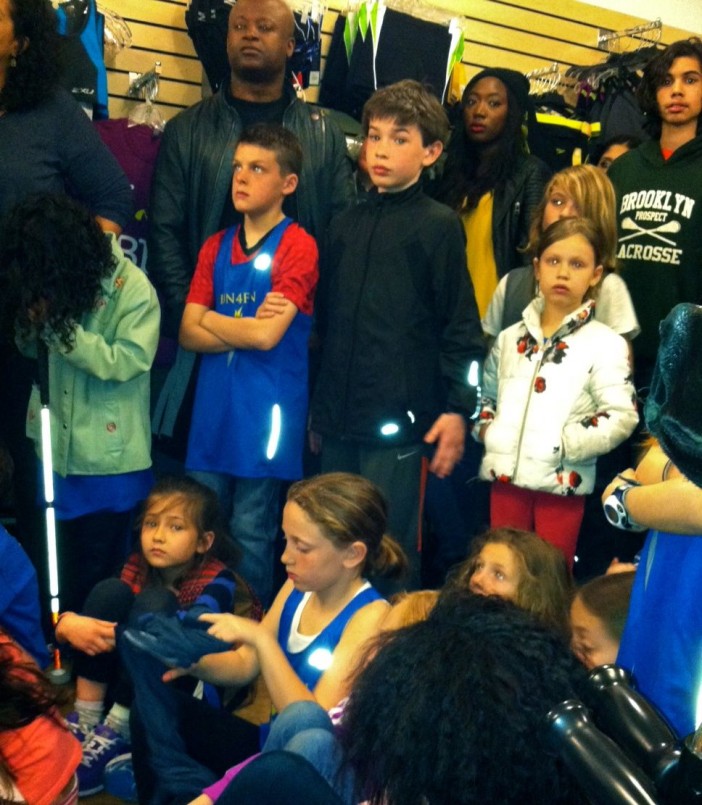 As the weather warms up, we’ll see more and more runners enjoying Prospect Park, because as adults, many turn to jogging and running as a form or exercise and fitness. But what if you’d been exposed to running at an earlier age? Say, six years old?

Many kids in Park Slope have already felt the pull of running, thanks to Nicoletta Nerangis, a former PS 321 parent who is the current coach of the New York Road Runners‘ Mighty Milers and Young Runners program at the school, and the founder of Run4Fun, a new youth running club for all kids ages six through 13. She says she started Run4Fun in September 2013 as a way to help empower local youth through running.

“Providing these kids with early exposure to running gives them an incredible sense of accomplishment and teaches them the importance of staying fit,” she says, “and being a member of a team teaches them valuable life lessons about determination and cooperation.”

As a way to inspire the kids even further, Run4Fun hosted a night for youth and families at Jack Rabbit Sports on April 10 which featured a man who can certainly show just how far running can get you — Derrick Adkins, Olympic gold medalist in the 400 meter hurdles.

Runners had a chance to check out the PS 321 Boston Strong quilt, created by many of the Run4Fun kids when they were Young Runners at the school last year. The quilt was displayed last fall during the Chicago and NYC marathons and will be traveling to Boston for their marathon on April 21. 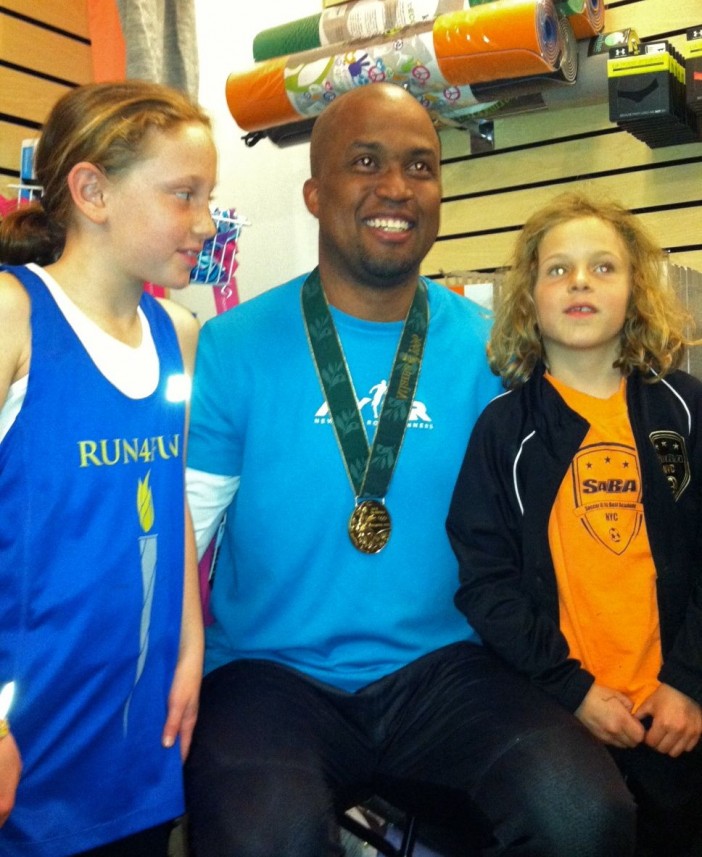 Noa Costom, pictured on the left with Derrick, is a 10-year-old 4th grader who has been a Mighty Miler at PS 321 for three years. She says she joined the group because her friends already had, but found she liked running and “representing her school at NYRR races and feeling ‘official.’” Now that she’s on the Run4Fun running team, her past experience as a Mighty Miler gives her “that one thing in common with all the other kids.” Noa runs every other weekend with her parents now. 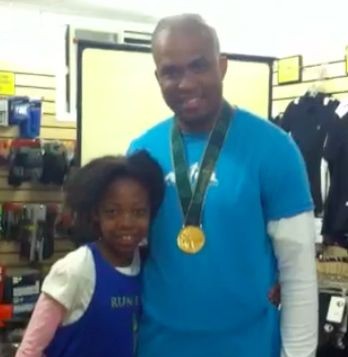 Another long-running Mighty Miler is Kaylee Hammond (pictured with Derrick to the right), a 10-year-old 5th grader who’s been with the group for four years. She calls Run4Fun a “second home,” and says she likes it because “you make friends, and you are all nice to each other and help each other when the running gets hard.”

When Kaylee was in 3rd grade, she competed in the adidas Grand Prix Fastest Kid competition and came in 4th place! Kaylee will be graduating from PS 321, and her new school doesn’t have a running program, so she’s happy that she’s joined Run4Fun so she can run during the summer. 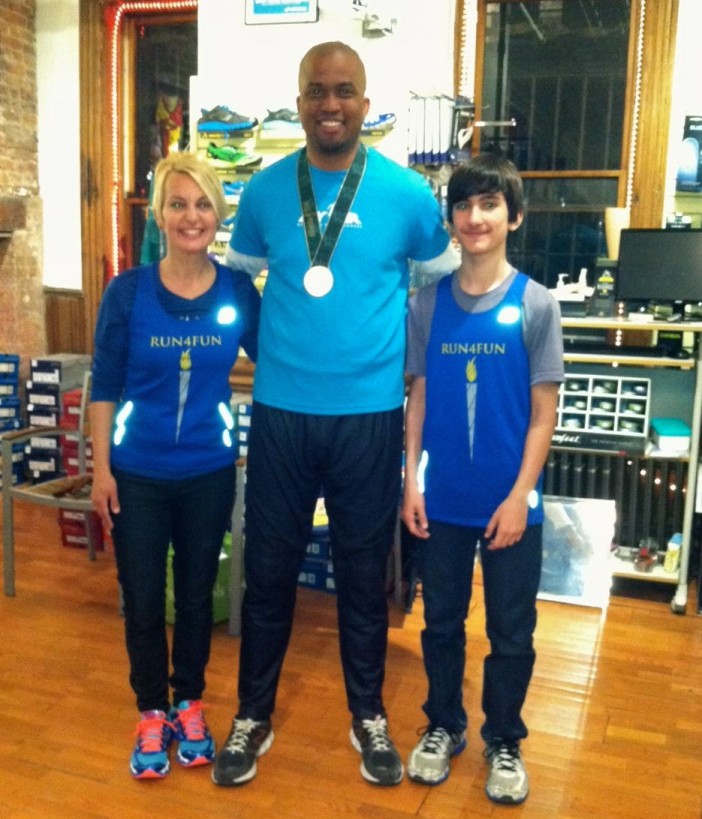 Coach Nicoletta doesn’t just inspire other kids — she’s pictured here with Derrick and her own son, Panagiotis, who is also an avid runner.

The 11-year-old 6th grader is a PS 321 Young Runner alum and says he loves being a member of Run4Fun because “all the kids encourage each other in races.” He likes “comparing his running times and trying to improve his speed at races.” He feels that being a Young Runner at PS 321 helped to “expose him to running and a lot of really good stuff.” He still feels “very connected to other Young Runner alumni,” and “happy that they are also in Run4Fun.”

He’s very proud of his mom for starting the group, and one day he hopes to run a marathon with her. These days, he says he runs at least three times a week.

Another proud PS 321 Young Runner alum is Gus Rader, who is now a 6th grader at Brooklyn Prospect Charter School. His mom, Amy Crews — who is very involved with Run4Fun, including working on the design and production of their singlets, and who plans on becoming a board member — says Gus was always a very active child, but also very shy.  When he started running with Nicoletta as a Young Runner three years ago, she says it took him “totally out of his shell,” and also “helped him tremendously with the transition to middle school early this year.”
Amy’s daughter Hazel, a 2nd grader at PS 321, is currently in the Mighty Milers program, and although they are totally different kids, she says “running is a fantastic experience for Hazel as well!” 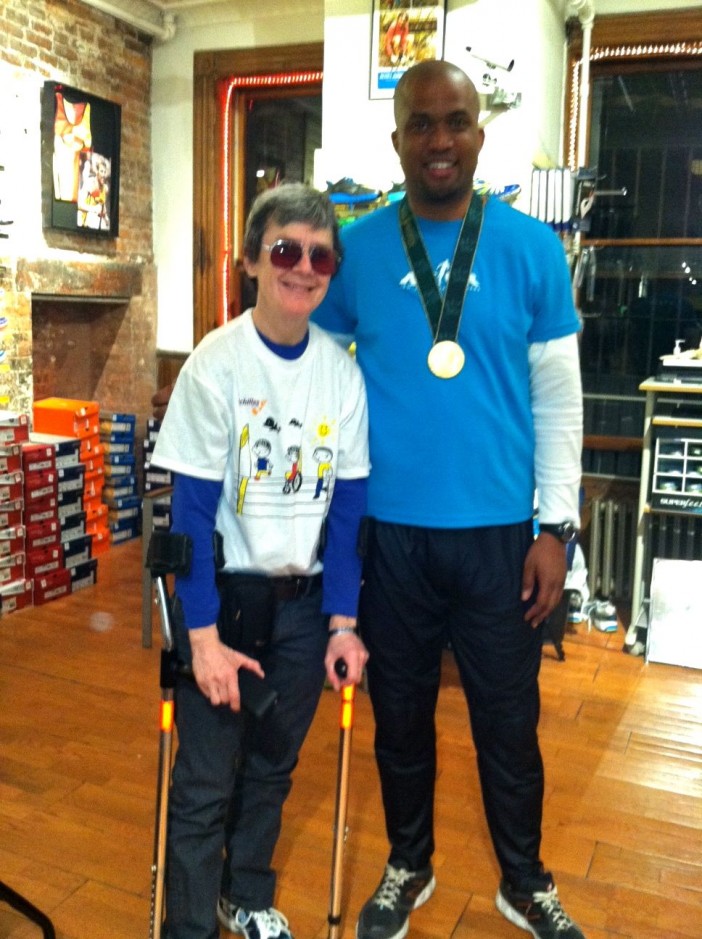 Karen Lewis has been director of Achilles Kids, a running/walking/rolling program for children with disabilities,and she cannot overemphasize the importance that being part of a team like Run4Fun has on Achilles kids.

“The physical part, of course is important in terms of improving mobility, but it’s also transformative in terms of self-esteem, a sense of pride and accomplishment and inclusiveness,” she says.

Achilles Kids provides free school-based support and incentives in addition to weekend races and events. They serve over 8,000 kids and have approximately 180 chapters in schools in New York and other states. 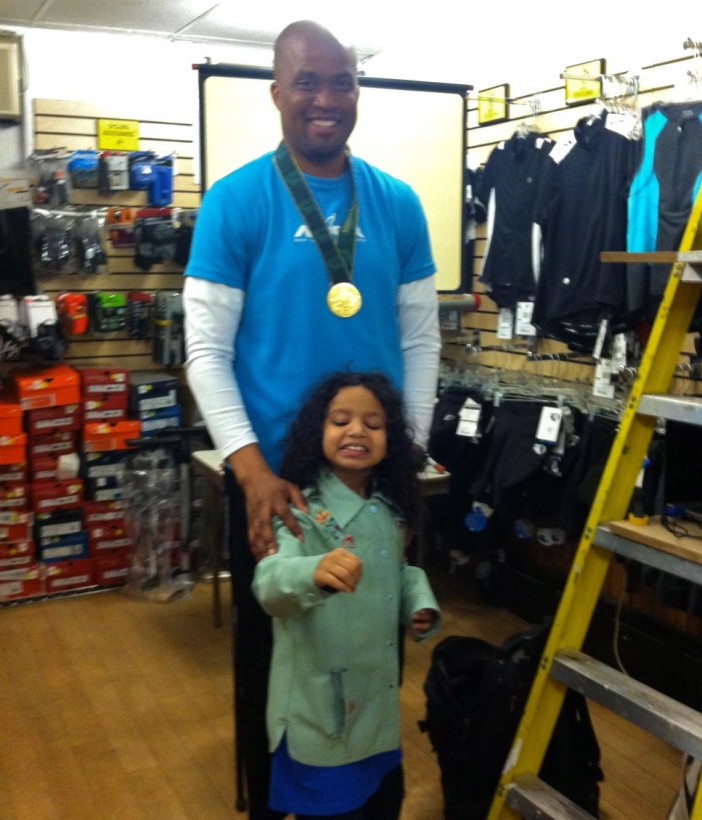 The newest Run4Fun member is 8-year-old 2nd grader Maya Graves. She’s in her first year as a PS 321 Mighty Miler and is also an Achilles Kid member, and she signed up for Run4Fun last night, saying that she was “very excited!” to do so.

Maya loves running with her friends and was influenced by her dad who just ran his first Marathon — the TCS NYC Marathon — this past fall. She says she has “lots of medals” from her time as a Junior Blind Olympian when she lived in California last year.

The Run4Fun program is already more than 50 kids strong, but has room for more young runners between the ages of 6-13, including options for scholarships. If you’re the parent of a kid who’d be interested in getting involved.